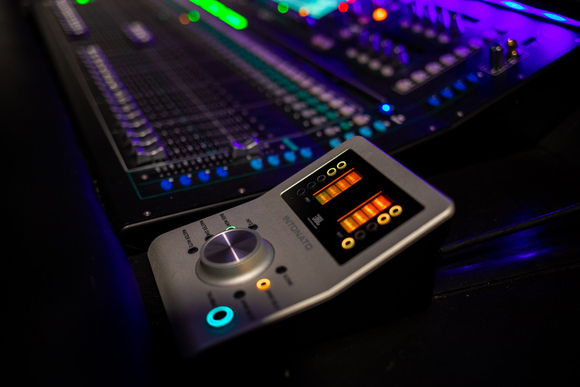 Written by Douglas McGrath and premiered in 2013, Beautiful is an award-winning musical based on the life and career of renowned songwriter Carole King. The show features arrangements of hit songs written by King, including “Some Kind of Wonderful,” “It’s Too Late” and “I Feel the Earth Move,” as well as other popular songs from the 1960s. The 2020 U.K. production features an eight-member pit orchestra to back up the cast, plus live piano performed by Daisy-Wood Davis, who plays the role of King.

“The biggest challenge was reproducing the beautiful orchestrations that were written for the show, the details of the instrumentation and the vocals,” said Gayle. “Anyone can put speakers up, put up a microphone, put it through a mixer and make it louder. Making sure you replicate what is actually being played and what's being said is the biggest challenge—keeping true to the material.”

In the spirit of staying true to King’s work, Gayle specified a JBL line array system composed of 34 VTX A8 loudspeakers and six VTX B18 subwoofers for powerful, detailed sound. With dual 8-inch Differential Drive woofers, four 3.5-inch midrange drivers and two 2-inch high-frequency drivers, the JBL VTX A8 delivers transparent response down to 49 Hz. An improved Radiation Boundary Integrator (RBI) waveguide gives the VTX A8 broad 110-degree horizontal dispersion to reach the entire audience. The JBL VTX B18 subwoofers give the system powerful low-end with double-flared Slip Stream ports for minimal distortion and turbulence. Gayle specified the subwoofers to be ground-stacked, coupling with the building itself so the audience could “feel the earth move.” Crown I-Tech 4X3500 HD amplifiers power the system.

“The first time I heard the VTX A8 was about a year to a year and a half ago,” said Gayle. “I was impressed with how open and transparent it was. Everything that I put into it just sounded great, and you heard the detail of everything that went into it. With a show like Beautiful, the orchestrations are so detailed and integral to the show that the A8 was a no-brainer for me. I thought, ‘this is the box that I want to showcase the music.’”

To capture the pit orchestra’s drum kit with maximum detail and punch while achieving adequate isolation, Gayle selected AKG C414 XLS large-diaphragm condenser microphones. An evolution of the classic C412 used in studios to record many of King’s hits, the C414 XLS retains the sonic character of its predecessor while offering added flexibility. Five polar patterns allow precise, targeted capture in any situation, while adjustable switches for the pad and high-pass filter allow fine-tuning for a clean sound. These features made the C414 XLS ideal for capturing drums in the pit and a variety of other uses.

“The C414 is an industry standard,” said Gayle. “It’s a great all-around large-diaphragm mic that you know you can put on vocals, a trumpet, or a high-sound-pressure instrument and it will sound great. What goes into the microphone comes out. It doesn't color what you're amplifying at all. It's robust and reliable, especially for a touring production.”

Gayle chose BSS AR-133 active DI boxes to capture electric instruments in the pit. With built-in phantom power, input attenuation from 0 to -40 dB and a rugged chassis, the AR-133 excels at capturing clean sound and withstanding the rigors of touring.

According to Gayle, the combination of crystal-clear AKG microphones, flexible Crown amplifiers and state-of-the-art JBL VTX loudspeakers is getting rave reviews from audiences on the Beautiful tour.